Dating the origin of Japanese languages with Bayesian phylogenetics 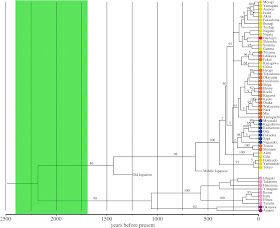 One more success story in the application of Bayesian phylogenetics to language studies. As Nicholas Wade reports:

Researchers studying the various dialects of Japanese have concluded that all are descended from a founding language taken to the Japanese islands about 2,200 years ago. The finding sheds new light on the origin of the Japanese people, suggesting that their language is descended from that of the rice-growing farmers who arrived in Japan from the Korean Peninsula, and not from the hunter-gatherers who first inhabited the islands some 30,000 years ago.

I think it's absolutely fascinating how closely the authors' date for Japonic languages corresponds to the Yayoi period. The Quentin & Atkinson way of doing language age estimation was initially met with derision by the linguistic establishment: part of it was that they did not understand it, part of it that it was introduced with a very controversial topic (Indo-European), and part of it that it triggered a deep-seated skepticism against the application of biologically-inspired methods to the study of culture.
Nonetheless, the method keeps on bringing reasonable results every time it has been applied, and it has now been adopted by many researchers of a quantitative inclination.
From the paper:

Fortunately, recent progresses in phylogenetic methods and their application in studying languages were found to provide adequate solutions for these problems [6]. Accumulating empirical evidence suggests that languages have, astonishingly, gene-like properties in numerous aspects and they also evolve by a process of descent with modification (for review, see [7]). This implies that once the shared innovations among languages are revealed by converting linguistic signals (i.e. presence or absence of homologous words) into discrete binary characters, various stochastic phylogenetic techniques for modelling biological evolution can be used to adequately reconstruct the history of language evolution. During the last decade, therefore, these techniques were quickly adopted to critically examine, and subsequently corroborate, instances of farming/language co-dispersal for Bantu [8], Indo-European [9] and Austronesian speakers [10]. 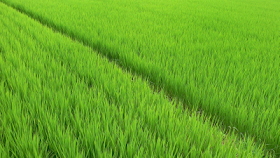 What I find fascinating is the widely different manifestations of the farming/language dispersal phenomenon: the earliest attested one is the expansion of Indo-European languages from Asia Minor ~9,000 years ago, and the latest one the expansion of Japonic languages from mainland Asia ~2,400 years ago. Bantu, Austronesian, Semitic languages fill the void between these two dates. The law-like regularity with which farmers fill lands, transform the landscape, grow in numbers, and start diverging linguistically as they do so is a rare instance of mathematical regularity manifesting itself in the recent history of our species. 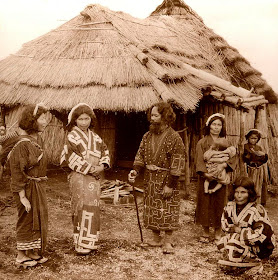 But, lest we get too much carried away by admiration for the farming phenomenon, let's tip our sugegasa to the Jomon hunter-gatherers of Japan, who were the partial ancestors of the modern Japanese people, and whose genetic legacy is best preserved among the Ainu (left). Again, from the paper:

If our results are correct, one surprising aspect of prehistoric Japan becomes apparent; the hunter–gatherer population, which settled in Japan around 12 000–30 000 YBP, managed to fend off the farmers for thousands of years until being abolished suddenly and dramatically with the arrival of proto-Japonic-speaking farmers around 2400 YBP. To place this in perspective, it should be noted that the hunter–gatherer societies and their languages in Europe began to be abolished by those of the farmers as early as 8500 YBP [9]. Even some of Japan's closest neighbours such as China had started agriculture since 9000 YBP [1], which progressively brought about fully fledged kingdoms equipped with metal tools fighting each other for political unification. During all this transition outside, the hunter–gatherers of Japan continued to prosper by using simple stone tools and without adopting full-scale agriculture, despite knowledge of cultivation of many crops [12]. There are probably two reasons that explain their unusually long survival. First, the population size of the hunter–gatherers may have been too large to be invaded by nearby farmers. The hunter–gatherer of Japan was perhaps one of the most affluent hunter–gatherers known to humankind, endowed with a large range of plants, animals and sea foods [46]. This vast availability of food resources is probably related to the fact that the world's oldest known pottery was made by the hunter–gatherers of Japan [47]. The development of pottery meant that unlike other hunter–gatherers around the world, they had a means to cook and store the foods that were available abundantly in their environment, and such could have triggered a population explosion to the extent that it prevented the farmers asserting any force over the hunter–gatherers for a long time. The second reason behind their long survival could be that it probably took a few thousand years for the farmers to modify rice, one of their main food sources, to grow in cold climate [48]. The archaeological evidence suggest it was not until around 3500 YBP that rice farming of warm southern China spread to the much colder Korean Peninsular [49], which is thought to be the most recent homeland of proto-Japonic-speaking farmers. A combination of these two factors might have contributed to the unusually long occupation of the hunter–gatherers in Japan.

Languages, like genes, evolve by a process of descent with modification. This striking similarity between biological and linguistic evolution allows us to apply phylogenetic methods to explore how languages, as well as the people who speak them, are related to one another through evolutionary history. Language phylogenies constructed with lexical data have so far revealed population expansions of Austronesian, Indo-European and Bantu speakers. However, how robustly a phylogenetic approach can chart the history of language evolution and what language phylogenies reveal about human prehistory must be investigated more thoroughly on a global scale. Here we report a phylogeny of 59 Japonic languages and dialects. We used this phylogeny to estimate time depth of its root and compared it with the time suggested by an agricultural expansion scenario for Japanese origin. In agreement with the scenario, our results indicate that Japonic languages descended from a common ancestor approximately 2182 years ago. Together with archaeological and biological evidence, our results suggest that the first farmers of Japan had a profound impact on the origins of both people and languages. On a broader level, our results are consistent with a theory that agricultural expansion is the principal factor for shaping global linguistic diversity.