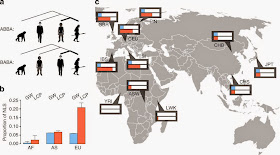 Ann Gibbons explains in Did Europeans Get Fat From Neandertals?:


In the latest study, published online today in Nature Communications, Khaitovich and his international team analyzed the distribution of Neandertal gene variants in the genomes of 11 populations from Africa, Asia, and Europe.

They found that Europeans inherited three times as many genes involved in lipid catabolism, the breakdown of fats to release energy, from Neandertals as did Asians. (As expected, Africans did not carry any of these Neandertal variants.) The difference in the number of Neandertal genes involved with lipid processing was “huge,” Khaitovich says. The study also offers another example of the lingering genetic legacy left in some people today by the extinct Neandertals.

Now the team is trying to figure out what the fatty acids do in the brain and how differences in their concentration might affect function. “We think it’s a very strong effect with very profound physiological changes,” Khaitovich says. “Otherwise, we wouldn’t see it in the brain tissue.”

Although Neanderthals are extinct, fragments of their genomes persist in contemporary humans. Here we show that while the genome-wide frequency of Neanderthal-like sites is approximately constant across all contemporary out-of-Africa populations, genes involved in lipid catabolism contain more than threefold excess of such sites in contemporary humans of European descent. Evolutionally, these genes show significant association with signatures of recent positive selection in the contemporary European, but not Asian or African populations. Functionally, the excess of Neanderthal-like sites in lipid catabolism genes can be linked with a greater divergence of lipid concentrations and enzyme expression levels within this pathway, seen in contemporary Europeans, but not in the other populations. We conclude that sequence variants that evolved in Neanderthals may have given a selective advantage to anatomically modern humans that settled in the same geographical areas.