f-statistics are robust to differences in sample age

In a previous posts I raised the possibility that ancient DNA samples might appear admixed only on account of their greater age, which would make them appear genetically closer to an outgroup population by the mere fact of having fewer generations (less drift) separating them.

For example consider the following figure, in which I've made all three populations have different ages: 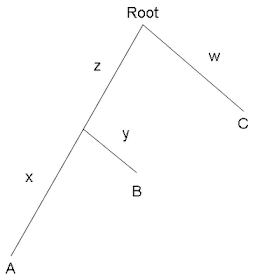 Now, it is true that in terms of sequence divergence divergence(B, C) will be less than divergence(A,C), simply because of the fact that A has had more time to "evolve" away from C, or x is greater than y.

But, if we look at the f statistics, no signal of admixture will appear.

The same is true for the f4 statistics, in which we have to add another outgroup D: 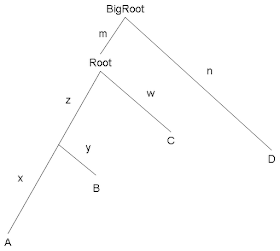 So, I am now convinced that the f statistics are robust to sample age. B may have sequence that is very close to C (if z+w+z is very small compared to x), but the f statistics will not show him to be a mix of A and C.

And, this is very good, because it means we may have one less thing to worry about when dealing with ancient DNA samples.
Share